Witness a kaleidoscope of colours exploding this spring with the arrival of Western Australia’s incredible wildflower season. There are more than 12,000 flowering species; 60 per cent of which can’t be found anywhere else on earth. Pink, purple, yellow, white, red, orange, blue and green: nature’s dazzling display of colour will take your breath away.

With so many diverse and beautiful blooms bursting into life from July to November each year, it’s a spectacle to behold – and a major drawcard for nature-loving tourists.

When and where do the wildflowers bloom in Western Australia’s South West?

The season in the South West region runs from September to November, with October being the peak month. Flowers can be found almost anywhere, from coast to caves, sprawling fields to the forest floor, but here are some guaranteed hotspots. 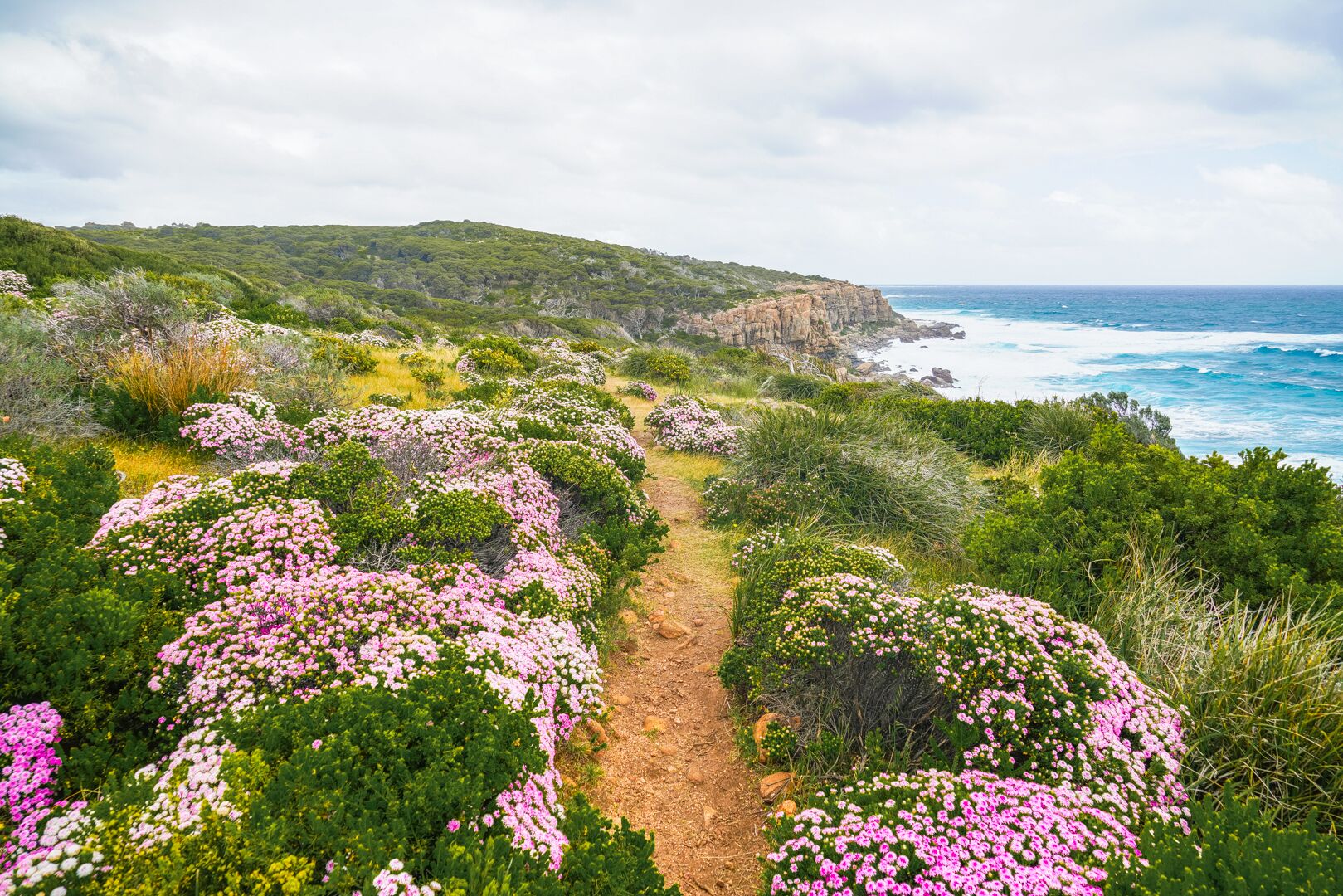 The Cape to Cape Track

The glittering blue ocean below and a landscape drenched with colour, this wonderful coastal trail between Cape Naturaliste Lighthouse (near Dunsborough) and Cape Leeuwin Lighthouse (near Augusta) is a must-do. Along the track you’ll be treated to beautiful views of caves, cliffs, coast and, of course, wildflowers.

Find dozens of different orchids including Augusta Bee and vanilla, plus native wisteria, one-sided bottle brush, coral vine, fan flowers and more. If you’re not keen on venturing along the trail, both Cape Naturaliste and Cape Leeuwin are worthy flower-spotting locations in their own rights. 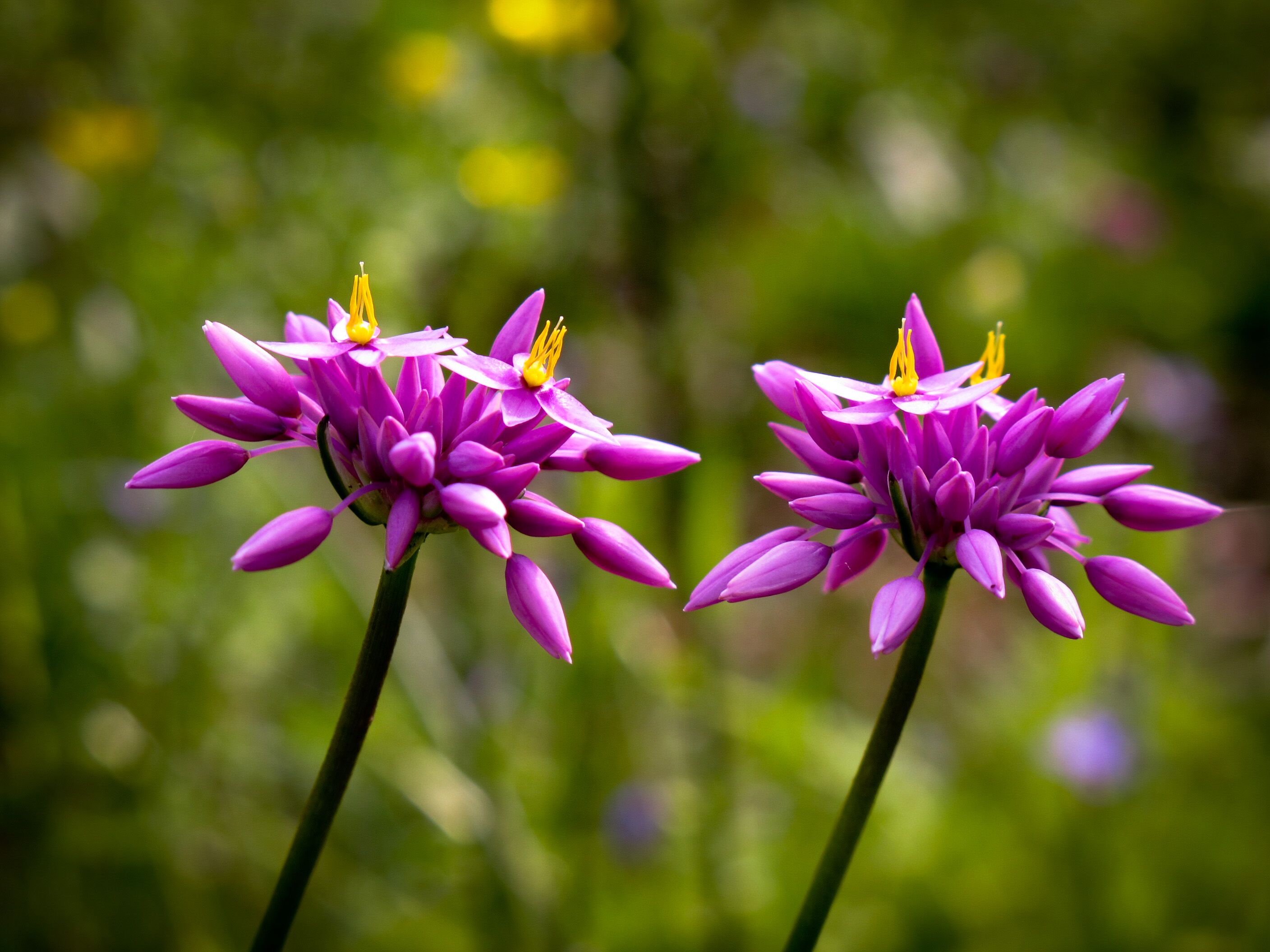 Just south of Margaret River, on the way to Augusta, is Boranup Forest. Step into this magical zone of serenity: skyscraper karri trees, cheerful birdsong, a forest floor alive with greenery and flowers jostling their way into the sunshine. 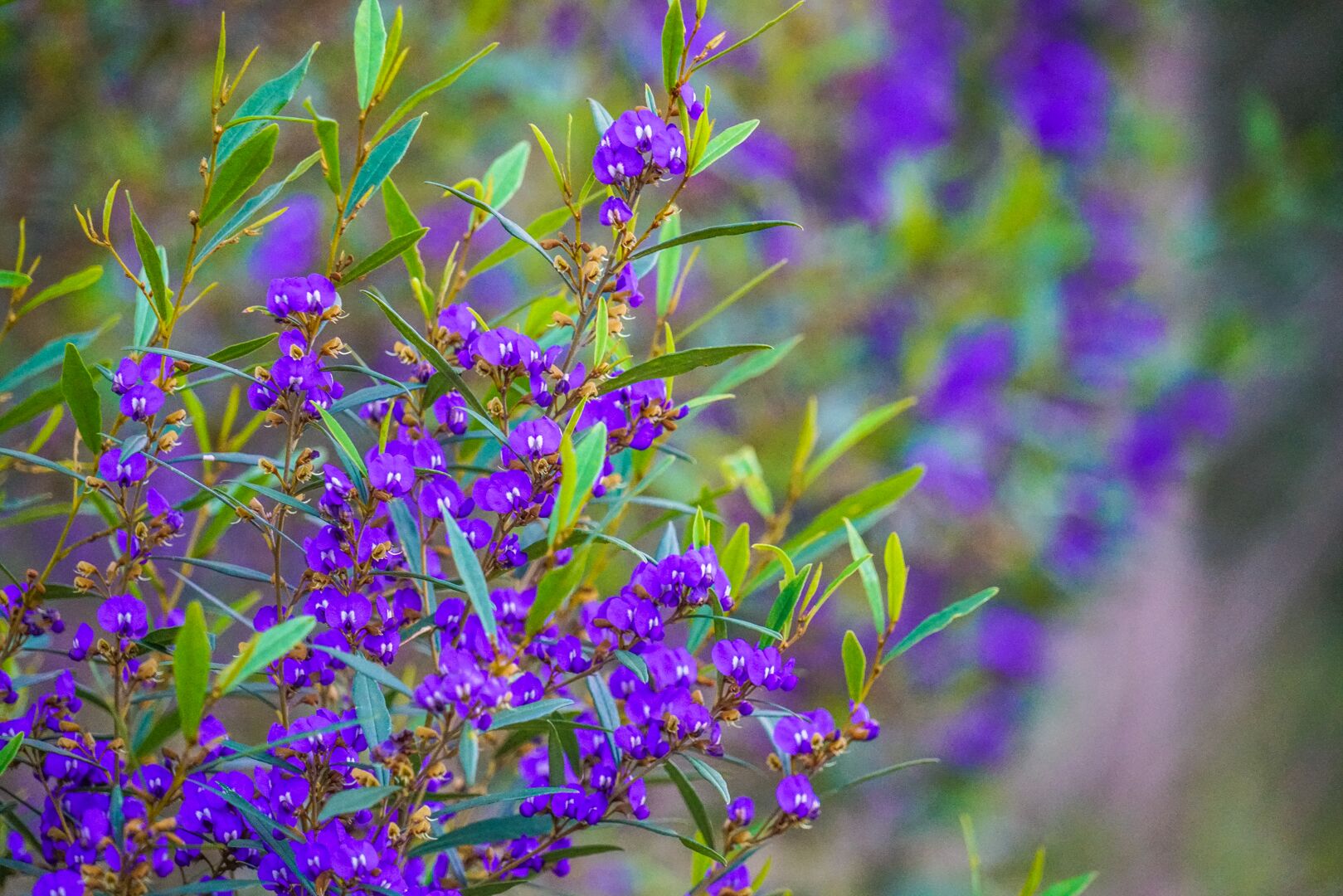 Look for the pretty purple hues of Karri blue bush, trailing clemantis and Caladenia latifolia – commonly known as pink fairy orchids. They really do look like little fairies and your young family members are sure to be captivated.

There are a few great spots around town to get out the camera and take snaps. Ambergate Reserve, south of Busselton, is a 75-hectare haven for birds, kangaroos and, of course, a diverse display of wildflowers. 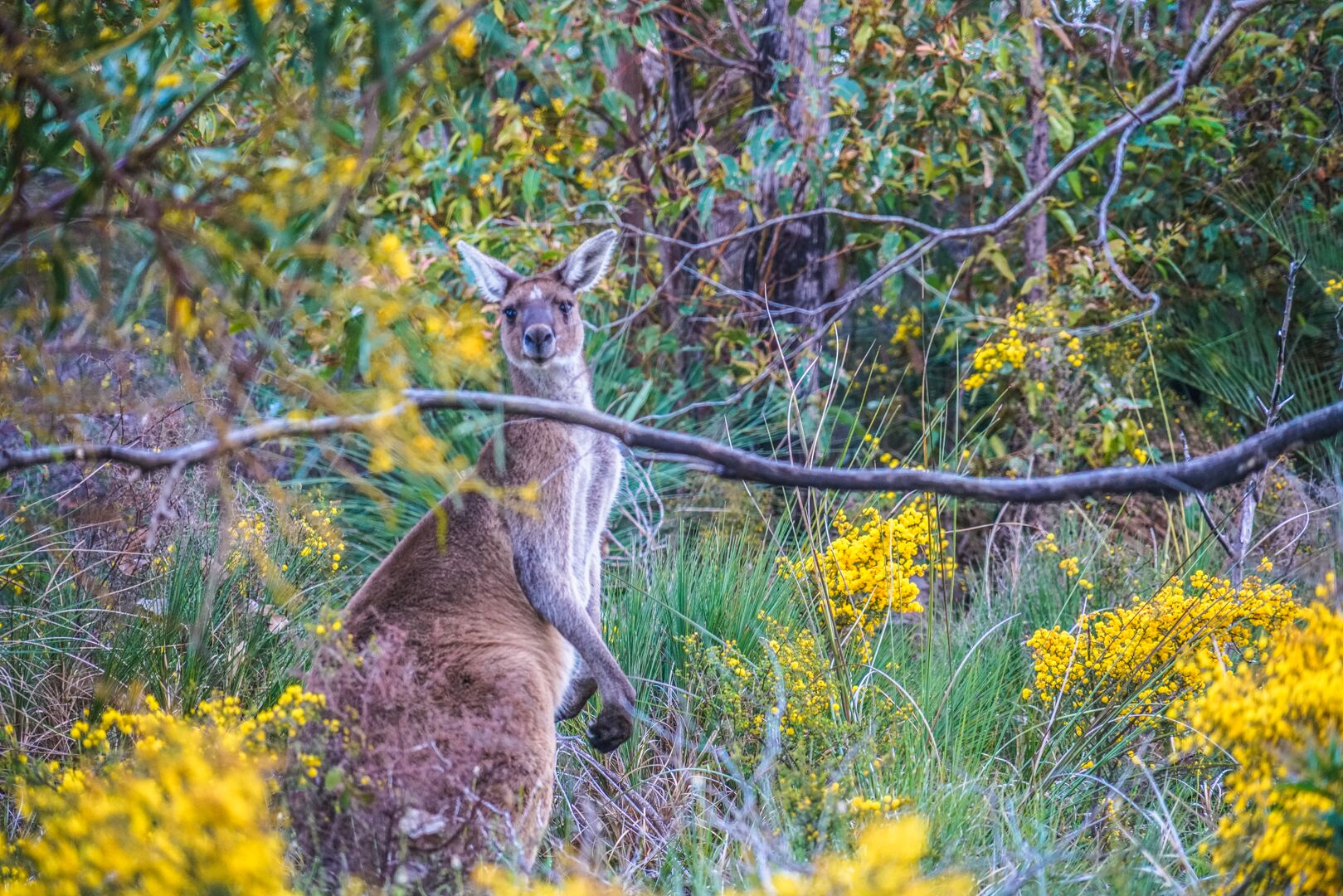 The Dunsborough–Yallingup region is home to some of the most picturesque beaches you will ever lay eyes on: Meelup, Bunker Bay and Eagle Bay. Meelup has a 7.4 km walking trail, where you can wander amongst its beautiful flora.
At this time of year you may also spy some whales as they frolic offshore. 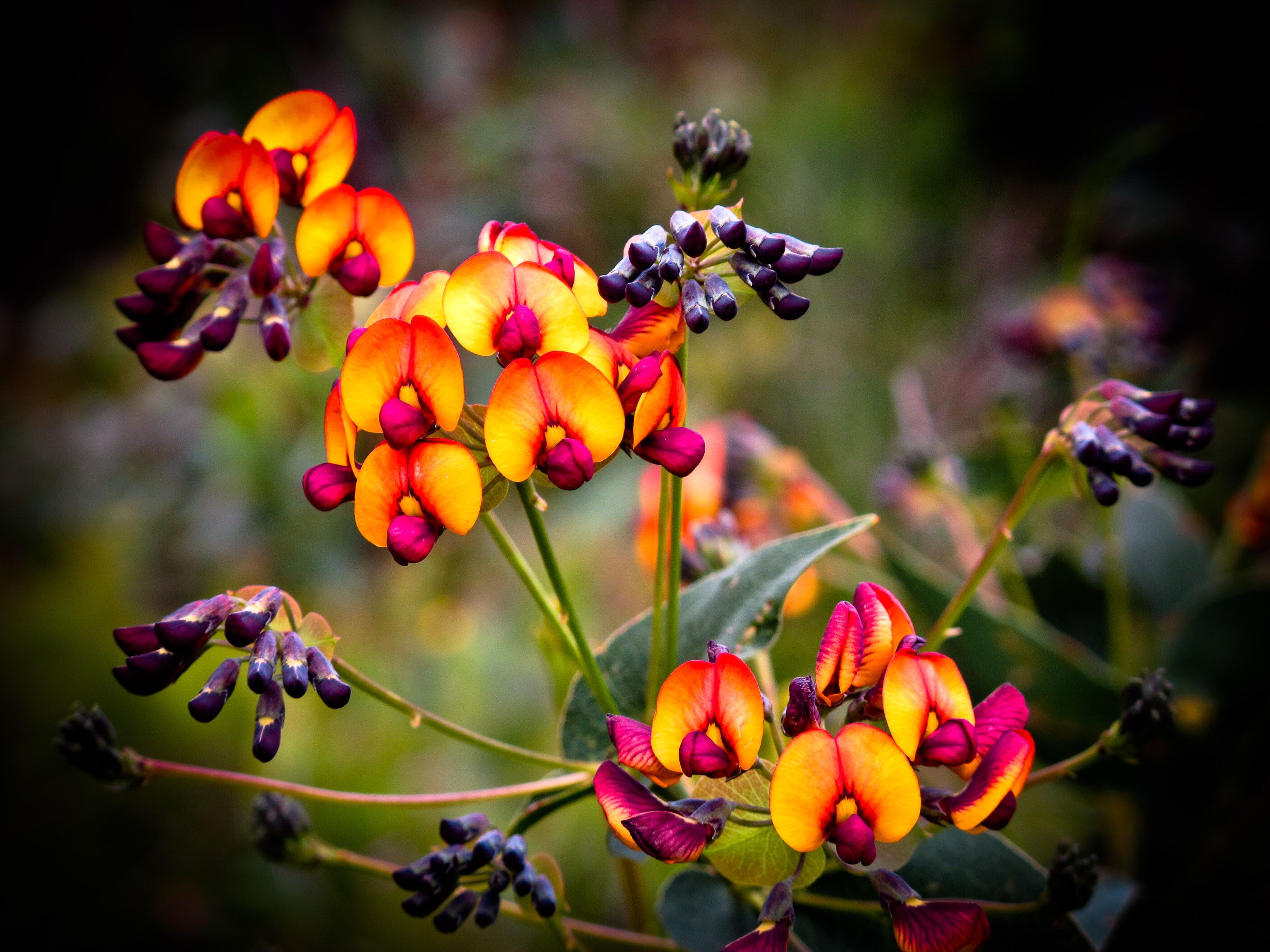 Buy your copy of Find that Flower: Colour Guide to the Wildflowers of the Cape to Cape Track and Australia’s Southwest Corner online. In it, there are pictures of more than 300 species. Also check out Western Australia Visitor Centre’s wildflower tracker app.

Can you pick wildflowers in Western Australia?

No. Although the flowers are lovely, it is illegal to pick them.

There are 80 types of carnivorous plants in WA’s south.

If you’re not sure exactly where to go or if you’d just prefer to sit back and let those in the know lead you to the very best spots, consider a wildflower tour.

Learn more about the region’s diverse range of flowering plants at the 94th Wildflower Exhibition 2019 in Busselton on 26 and 27 September, 2019.

Western Australia is a wildflower hotspot that has to be seen to be believed. Visit this spring to experience the phenomenon.

Contact our booking consultants on +61 8 9750 5444 for more details and advice, or go online to secure your accommodation.

5 best walks on the Cape to Cape