Busselton Jetty opened in 1865 at just 176m – a fraction of its current-day length. To demonstrate how old it is, for reference, it was built before the telephone, the incandescent light bulb, the can-opener, and even before blue jeans became a thing. It was in existence even before the six British colonies ‘Down Under’ decided to become the Federation of Australia.

It played a large role in the timber, agricultural, whaling and tourism industries, but in 1972 it closed as a shipping port after having serviced 5000 ships over its 107-year history. The jetty also survived the 1999 fire that engulfed it and destroyed 70m of timber, as well as being severely damaged in 1978’s Cyclone Alby.

Busselton Jetty has been reborn as a tourism drawcard. The longest timber-piled jetty in the southern hemisphere, it is one of the highest-rated attractions online and offers a range of activities:

The view from the underwater observatory. Credit: busseltonjetty.com.au

The Jetty organisation is also involved in marine research in Geographe Bay. 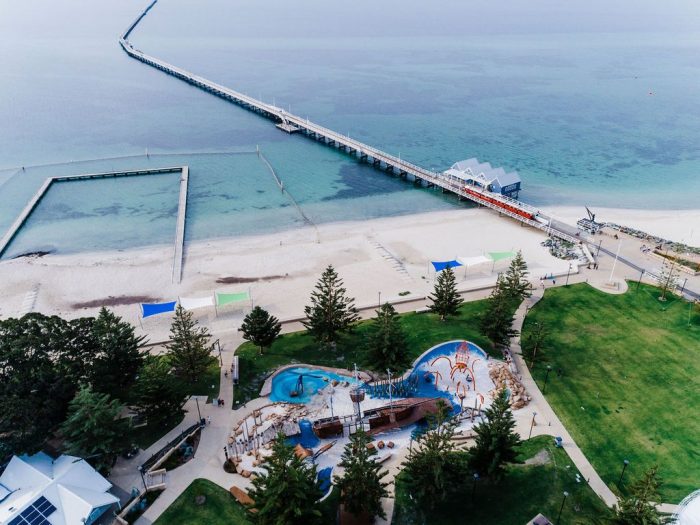 What you need to know before you go

The jetty is open 24 hours every day of the year to stroll on. The Interpretive Centre with the cultural museum and hire facilities is open from 8:30 a.m. to 6 p.m. 7 days a week, the jetty train from 9 a.m. until 5 p.m., and the underwater observatory from 9 a.m. until 4 p.m. The train and underwater observatory sometimes have night tours, so contact the Jetty for more information.

Private Properties have a number of holiday homes close to historic Busselton Jetty and Geographe Bay. Explore your options here.

Discover the lighthouses of the Margaret River region