Entering a cave is like stepping into another world. Ancient formations dripping from the ceiling, fossils embedded in rock, unusual colours glittering in the light, and the twists and turns of the cavern pathways that reveal something new to gaze at in wonder.

Western Australia has one of the oldest landscapes in the world, and the Margaret River region alone has more than 100 limestone caves that are thought to be around a million years old. Despite the numbers, only a few are open to the public.

We’ve listed the ones definitely worth a visit, from north to south (we couldn’t possibly pick a favourite because they all offer so much) with all conveniently located along the aptly-named Caves Road.

Did you know this was Western Australia’s very first tourist attraction? Located between Dunsborough and Yallingup, Ngilgi has loads of options for visitors. You’ll first be led by a guide into the gorgeous ‘The Amphitheatre’ and then left to self-guide your way through the pretty cave.

You can do this part only, or you can feed your adventurous spirit and take it further. Don a hard hat, grab a torch, and choose from either the Ancient Riverbed or the Cave Explorer tour, both led by skilled guides. You’ll even get to experience the cave in complete cool stillness, 45 metres below the Earth’s surface, as they turn out the lights for a moment. Imagine how extraordinary it must have been for those who investigated Ngilgi by candlelight in the 19th century. 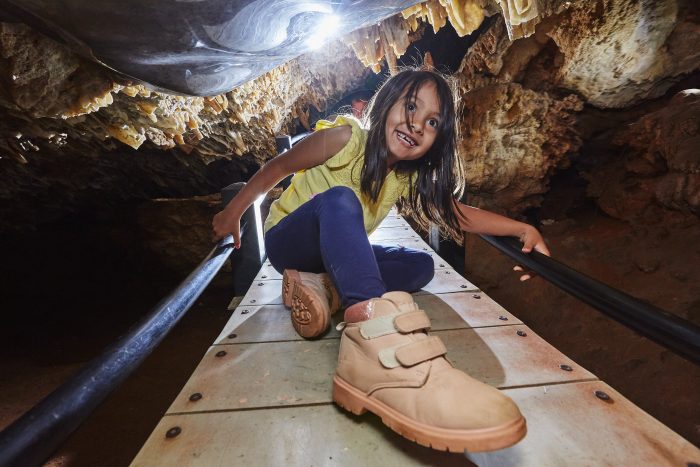 This is a really great option for kids of all ages, and they’ll love the crawling space near the entrance too.
Find out more about Ngilgi Cave.

If you’re seeking a more rugged and natural experience – but without being too bold – this is the place for you. There’s no permanent lighting installed in this Boranup Forest cave so you’ll be wandering the paths on your self-guided tour with a hard hat perched on your head and light attached. The facilities are, of course, well maintained, but there’s something rustic and Old World about Calgardup.

Pregnant women or those with bad backs or knees may find some of the areas where you have to bend down uncomfortable.

Find out more about Calgardup Cave.

An incredibly important palaeontological treasure for Western Australia, more than 10,000 fossils have been excavated here. These include megafauna such as the Giant Python and Marsupial Lion, and there is even the jawbone of a 50,000-year-old Zygomaturus (one of the largest marsupials to ever have walked the Earth) still embedded in its original location.

There’s plenty of space and you can walk the boardwalks at your own pace while listening to the audio tour via headphones. The culmination of the tour is particularly spectacular. Climb the stairs out of the darkened cavern and be bathed in sunlight as you re-enter the world above. As your eyes adjust to the light, take a wander through the marri forest pathway and enjoy the serenity before you head back into humanity.

This is a great cave for all ages and probably the best one, along with Jewel, for those nervous about small spaces. Mammoth is also the only wheelchair accessible cave in the region.

*While the Megafauna Nightstalk tour was not running at the time of publication, check back to see if it has re-commenced. It’s a real treat and a step back in time.

Find out more about Mammoth Cave.

Wow. That’s Lake Cave summed up in one word. Possibly one of the most spectacular cave exteriors you will ever set eyes upon, the entrance lies at the bottom of a huge sinkhole. Unsurprisingly, this is one of the deepest caves in the region at 62 metres. Access is via a descent down hundreds of stairs, past enormous lush Karri trees growing both on the bottom and above the crater, with stunning views all the way down. You’ll be craning your neck around in awe, guaranteed.

Its history is equally interesting. In 1867, Francis Bussell, daughter of Margaret River pioneer Alfred Bussell, discovered the area while searching for cattle. It took another 30 years before the family found the cave again. Francis’s brother John and explorer Tim Connelly dropped into the crater by rope and paddled through the cave’s crystal clear lake in semi darkness – incredible to consider nowadays. 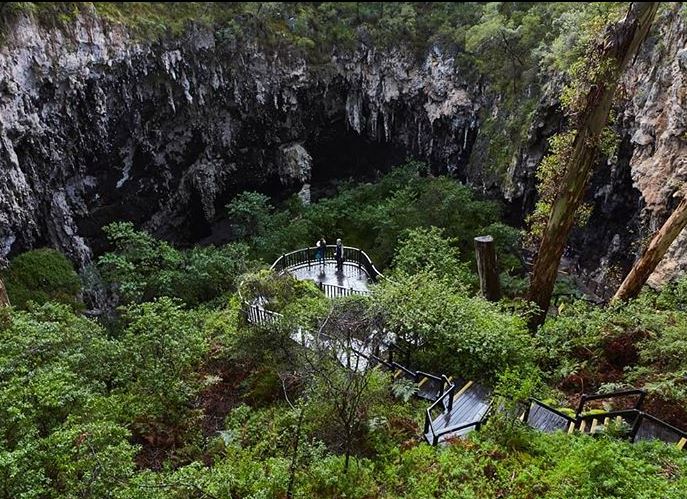 This is a small group guided tour so book your tickets and time slots early, if you can. Once inside, you’ll stroll past the beautiful permanent lake as it reflects the magnificent formations above, and there are a few vantage points where you can take in the whole main cavern. You’ll also hear the gentle dripping of water from the straws and stalactites as they continue to grow.

This one is best suited to adults and older children, due to the number of stairs. Its entrance is also probably not ideal for those anxious about small spaces. Once you get inside however, there’s plenty of room.

Find out more about Lake Cave.

There is only one way in and one way out – abseiling! This cave isn’t open to the public per se, so it would be advisable to join a tour. Book with an operator like Margaret River Climbing Co or Outdoor Discoveries but do double check to see whether they will be visiting Brides Cave or another nearby. If you decide to tackle Brides Cave, you will have the privilege of discovering an area of the South West that not many other humans have been able to set foot in.

An exhilarating one for those who want a bit of a challenge! This is rated a medium level cave, so no children aged under six are permitted inside. You’ll need to wear sturdy footwear for the pitch black 86-metre-deep cave, but you’ll be provided with a torch and hard hat for your self-guided tour. You’ll negotiate ladder climbs and rock scrambles; you’ll find yourself in a few tight spots and then out into large open chambers walking across boardwalks.

If you’re not keen on squeezing through restricted spaces, a non-guided tour, or you’re unsure about not having a lot of light, you will be better suited to one of the other caves on the list.

Find out more about Giants Cave.

Aside from being dazzling as its name suggests, Jewel is fascinating for a few reasons. Firstly, it is the home of Australia’s longest straw stalactite at 5.43m long. It also contains the fossilised remains of Tasmanian Tigers (keeping in mind these animals have not lived on mainland Australia for thousands of years!). With three distinct chambers, this is the largest of all the show caves in the region and it is also fully guided.

Jewel was opened to the public much later than the others, in 1959, but its existence had been known long before and was bestowed the nicknamed ‘Wind Hole’. The first explorers surveyed this mysterious cavity and, once inside, had to wade through chest-height water as the beauty surrounding them revealed itself. You will have a different view from those initial voyages because there has been a significant drop in the water table at Jewel over the past few decades.

This gorgeous ‘jewelled’ cave is truly spectacular – and surprisingly large. Perfect for the whole family, young and old.

Find out more about Jewel Cave.

Take a break from daily life and escape to the South West. Browse our portfolio to find your perfect luxury holiday home in Western Australia’s Margaret River region.