Welcome to our new Guest Portal. Login to view your reservations.

You know how the story usually goes. There’s an inspirational reason why someone landed on their career choice, and it was simply meant to be from the moment they could walk and talk.

Or not. It was refreshing to talk to entrepreneurial chef George Cooper of Tiller Dining about his start in the industry, and how there isn’t a mysterious, whimsical tale to be told of his past. In fact, his journey comes down to practicality, a good attitude, and discovering passion along the way.

“I grew up wanting to be a marine biologist, but I got to 15 and my dad said it wasn’t suited to me and I should get a trade. I wasn’t getting the grades. The week he told me that, I saw an ad for a local college for a Diploma of Hospitality and Cookery. I don’t even remember why I chose cooking, but I saw the ad and I applied,” he says.

“And that’s how I fell into cooking.”

Just like that. Okay, so what about growing up? Were you inspired by anyone? Was cookery in your blood?

“There wasn’t any ‘cooking with nonna’ stories like you hear other chefs say! I grew up in Central England. There was no glam food going on; the claims to fame were brewing and Marmite. It wasn’t a wealthy town and there wasn’t anywhere fancy to eat out,” he says. “My mum always made sure there were baked goods in the house, but food definitely wasn’t a big thing where I grew up.”

This is not a childhood unfamiliar to a lot of people, of course. But how then, from such modest culinary beginnings, did he become a dynamo chef on the other side of the world with a popular private dining business with its progressive and admirable values?

“I’ve always had the attitude that you have to put 100 percent effort into something. I just embraced the profession. I got Chef of the Year – you could say it was the equivalent of winning WA Chef of the Year – and that gave me the ability to seek out better jobs,” George says. 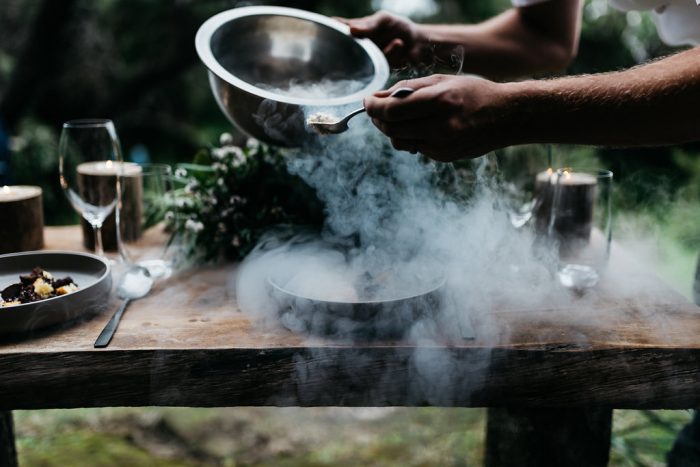 These better jobs included Michelin star restaurants in England, where he refined his skills and revealed the path he would take in the world of food.

A new life in Australia

It was that same hardworking attitude that brought him success on Australia’s sunny shores. With his now wife and business partner, Kayleigh, he set out to travel the country for eight months. The duo came to Western Australia by pure chance but fell in love with the South West, as so many do.

“WA and SA were the only states at the time with chefs on the skilled occupation list, and WA was one of the places we wanted to come back to anyway. We spent three weeks travelling Perth to Augusta and back, and it was really strange – it felt like we were driving home,” he says. “There was something about Dunsborough, like there was this magnetic pull.”

George and Kayleigh arrived in the South West in February 2012. By July that year they had bought a house, and by September they had started their high-end catering and private dining business, FoodbytheChef, later followed by TheWeddingcaterer (both now amalgamated under the one umbrella, Tiller Dining). 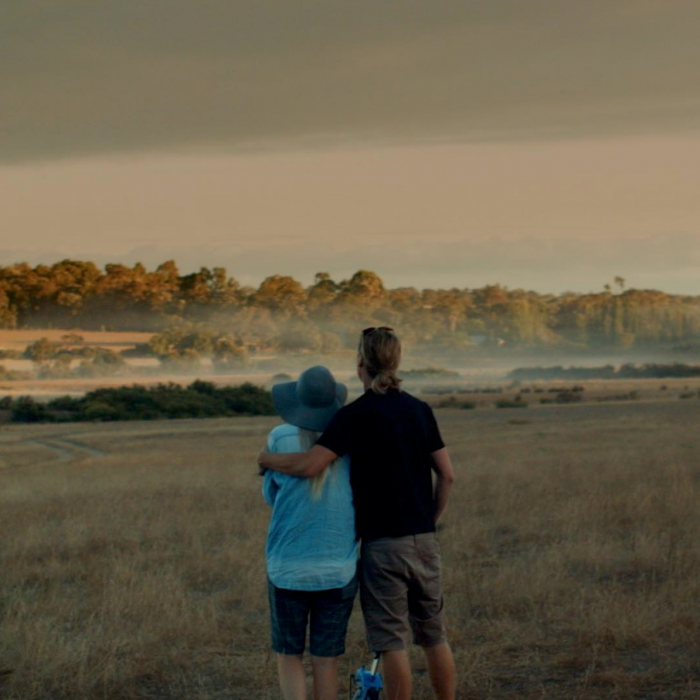 George and Kayleigh with vision for their Tiller Farm.

In 2017, they purchased a property which would become HQ: Tiller Farm on Yelverton Road in Yallingup. The dream was to promote a low food mile approach “without the hippiness”, George adds, to the fine dining experience.

“Doing high-class food with low food miles is something I’m very passionate about. We should be eating what’s in season. How can we expect to use capsicums every day of the year or eat strawberries every morning on cereal? We should be turning away from that,” he says.

“We use the best produce possible and we work with local farmers who are trying to do the right thing and looking after their pasture management. It’s doing the right thing by the environment so in 200 years we’re still doing what we’re doing and it’s sustainable.” 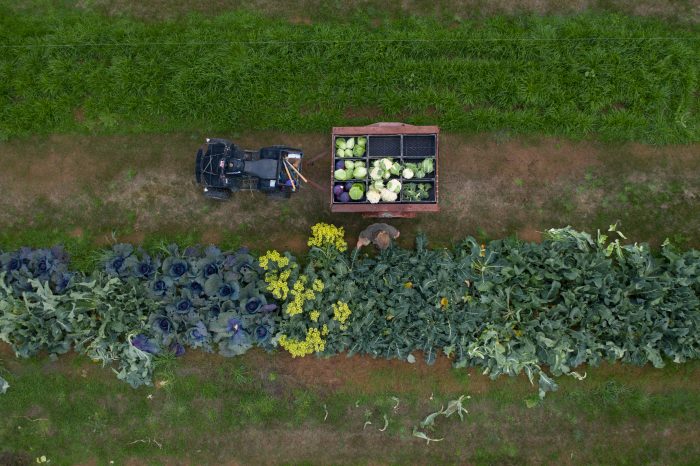 This is a 50-acre plot with a massive veggie garden and orchard, and home to a small herd of Dexter cattle and a flock of Dorper ewes and lambs. Plus it is an organic, herbicide- and pesticide-free environment, and the farm is carbon neutral. You’ll get all the feelgood vibes when you choose the Tiller team.

What you’ll experience with Tiller Dining

The property was planned and styled to maximise the experience for guests. When you’re in the dining room, you’re treated to a 260-degree view of the sprawling paddocks and valleys, and get to watch the sunset from your seat. 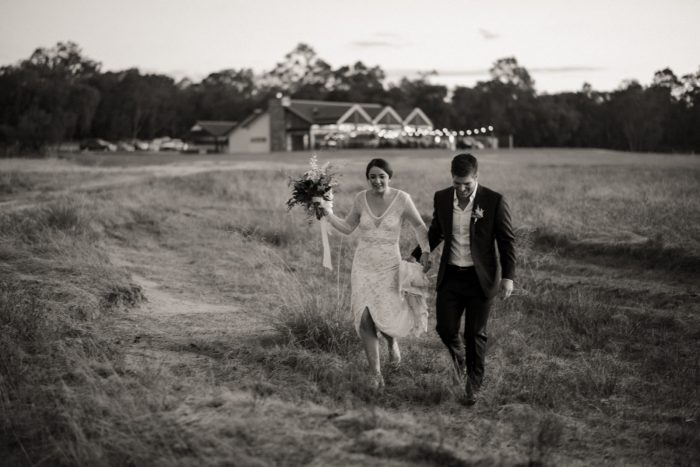 Kayleigh says they have differentiated themselves from the competition by avoiding that commercial function centre feel, and also focusing on building relationships with their guests.

“It’s probably why we’ve been so successful; we don’t treat people like a number,” she says. “There’s a handful of brides and grooms that we keep in touch with. They’ve seen us grow in the business and some have come back to see what we’ve done with the farm.”

This is a private venue so unfortunately you can’t just drop by for lunch on a whim, but it’s that personalisation and careful preparation in the lead up to your event that makes it extra special. It’s your occasion, your way. Here’s what you can book Tiller Dining for: 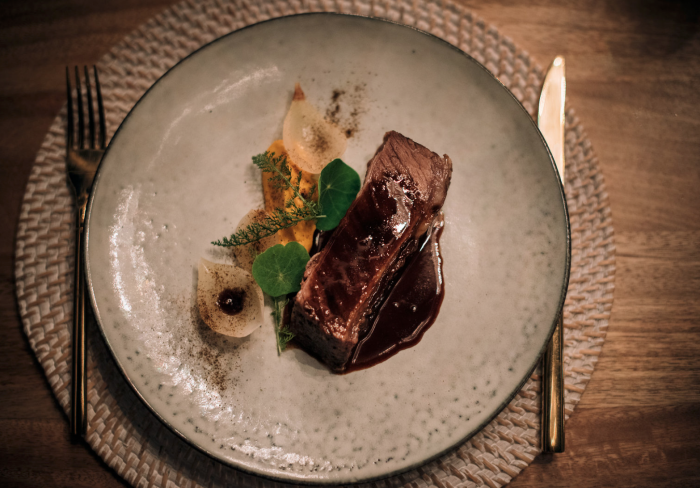 George is very clear that he and Kayleigh are a team. This is their sweet success to savour together.

“The build of our farm and dining room is what I’m most proud of, from my whole career. Just Kayleigh and I own it. No investors,” he says. “This is our dream and to look at what we’ve got here, doing what we’re passionate about, that’s a big achievement.”

A feast at Tiller Farm will be a food lover’s holiday highlight. Start planning your gastronomic adventure to the South West region, and browse our portfolio of holiday homes in the Yallingup and Dunsborough area.