We have entered a new phase in the world of food. It’s all about uncomplicated, unfussy dishes that allow individual ingredients to shine bright. And, what’s more, there’s a focus on prioritising local which is fantastic for both the environment and community producers.

We spoke with Aaron Carr, renowned chef and co-owner of hugely popular Dunsborough eatery Yarri, and passionate fan of this shift in the zeitgeist. If you’re a foodie, you’ve no doubt heard his name before. He led the team at Vasse Felix’s celebrated fine dining restaurant for two decades, he’s won numerous awards, and has regularly showcased his talents at the epic annual food festival Gourmet Escape.

“It’s about the food being good rather than just looking good,” Aaron said. “At Yarri, it’s about simplicity but, of course, the food has to be delicious. For example, we’ll put two or three things on a plate rather than ten; we’ll showcase a piece of fresh fish, use beautiful tomato and quality olive oil, and a great bit of cheese.”

“I wouldn’t want to go to Tasmania and eat marron, for example. I want the local wine and food experience! And that’s our philosophy at Yarri.”

He supports South West producers – butchers, fishmongers, veggie growers – and relishes using native ingredients wherever he can, taking his cues from the six season Noongar calendar.

“We’re not a native restaurant but we like to use local ingredients,” he said. “It’s more about understanding where we live and what’s around us. We believe in that and we respect the Noongars and their elders who lived here for thousands of years before European settlement. They have an irreplaceable wealth of knowledge and all-encompassing understanding of seasonality and place and it’s a privilege to learn from respected locals like Wadandi custodian Josh Whiteland.”

He introduces diners to meats they would never have ordinarily eaten, makes use of wild salmon and crab when they’re in season, and chooses native ingredients to add a unique pizzazz to a dish, such as saltbush, sea parsley, and beach mustard. You might even spot him thoughtfully picking along the coastline for quandongs, finger limes, and heavenly-scented wild boronia.

It wasn’t always this way. Aaron cites legendary cookery figure René Redzepi as an important influence in his professional life. The Danish chef is a hero of the home-grown food movement, with his three-Michelin star restaurant Noma consistently ranked as one of the world’s very best.

“People kept looking to Melbourne and Sydney for inspiration, but I thought we should look at what they’re doing abroad. I did a study trip to Denmark a few years ago because I wanted to see how they worked with local farmers and producers,” he said.

“I worked at Amass in Copenhagen with Matt Orlando – he was a chef at Noma before he went out on his own – who I was lucky to meet at Gourmet Escape. He really championed ‘where you live’, and supporting local producers.”

Returning to WA, head swimming with fresh ideas, Aaron brought this ethos to the kitchen of his brand-new venture, Yarri. It’s been a raging success since the doors first opened, with honest innovative fare for diners who are just that little bit open-minded. And it’s without a whiff of pretentiousness. In his eyes, a great culinary experience doesn’t need to be.

“It’s like wandering through San Sebastian eating tapas or having simple ramen on the side of the road in Japan,” he said. “For me, there was one memorable meal I had after work one night. You go to this machine – like a coke machine but there were little pictures of ramen – and you’re sitting there with a cold Kirin and a ramen, just watching Tokyo walk by. It’s those kind of life experiences, travelling and eating great local food, that’s important.” 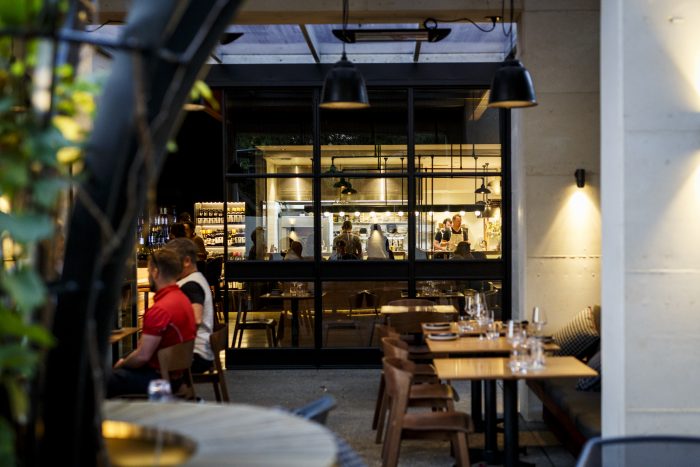 He loves pushing boundaries and getting people to venture beyond their usual palate, opening up what could be a whole new world of food appreciation.

“For example, we’ll serve this amazing raw emu and while the guest may have never chosen that typically, it’s a unique experience for them and they’ll love it,” he said. “We get so many people come up and say it was their best meal ever. That’s the joy of being a chef; it’s so rewarding and it’s something you can’t get in most other jobs.”

Luckily for diners in the South West, he believes in strong training and skill-building of the next generation of chefs, just as he was afforded as an apprentice at Jessica’s in Perth many moons ago. Giving back to the industry is one of his most important responsibilities, Aaron said.

“You’ve got to train chefs, and we always have an apprentice or two in the kitchen. We want people to move on and get a good job elsewhere for themselves. If I see someone who used to work for me has won something, I think ‘What a legend, good on them’ and send a text congratulating them. I want them to grow and be better chefs – to me that’s a win.”

Get your tastebuds tingling and make a book at Yarri in Dunsborough. Browse our portfolio of luxury holiday homes today.